Microsoft Offers Free Windows 10 Beta Download: Where To Get The Technical Preview 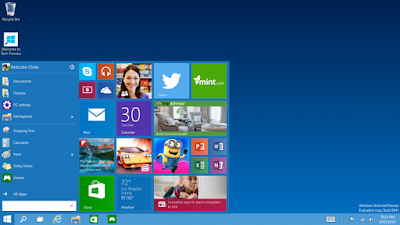 The software giant has so far said only that it will open registration for the Microsoft Windows 10 Technical Preview “soon,” but Microsoft often releases technical previews at 9 a.m. PDT (noon EDT) – the start of the business day at the company’s Redmond, Washington, headquarters.

The Microsoft Windows 10 operating systems technical preview will be available for download on Microsoft’s Windows site sometime Wednesday. The company recommends that only expert computer users and IT professionals download the preview, and that they install it on a secondary computer. The download will likely be open only to current Windows users running a PC with compatible hardware.

Microsoft warns that Microsoft Windows 10 operating systems contains a number of bugs, since it is still under development. However, Microsoft’s head of operating systems, Joe Belfiore, promises the company will quickly update Windows 10 to get it ready for a release sometime next year.
Posted by News at 4:51 AM 5 comments: